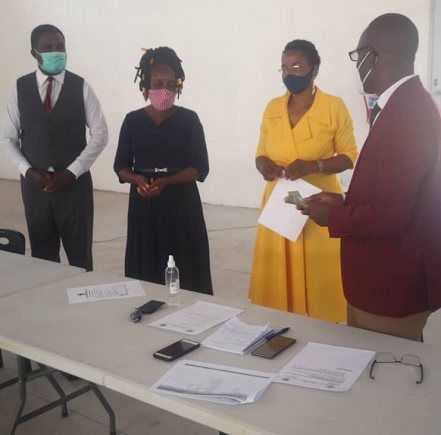 Members of the Ohangwena business community under the wing of Namibia Chamber of Commerce and Industry, together with several political leaders of the region, came to the aid of an unemployed mother whose daughter was admitted at a school of medicine.

The desperate mother, Ms Maria Shipanga, a resident of Epembe Constituency in Ohangwena Region, had sent a text message to the chairperson of Eenhana NCCI branch Ms Linea Haimbodi, asking for Good Samaritans who could contribute to the registration fees of her daughter Sofia Tuwilika Mwandingi who had enrolled in the Welwitschia Health Training Academy in Windhoek to study pharmacy.

After Haimbodi shared the message on the business people’s social media group pledges started coming in.

One of the first people to respond was businessman Peter Hatupopi who said: “I lost my father when I was just 5 years old. My mom, being a domestic worker, couldn’t afford to pay every cent for my school fees but she managed by selling omavanda, oimbale, and ombidi.

“The painful part is when I lost her just when I finished my Grade 12 in Haimbili Haufiku SS in 2009. I had no chance to pay back what she deserved and I shall live with this pain.

“So I know the pain of this and in this vein I hereby avail one school bag, 100 sanitary pads every year and N$5000 towards Sofia’s registration.”

A businesswoman ER Christof who is based in Ongwediva gave N$5000 which she deposited in the school’s account.

Other contributors gave amounts ranging between N$250 and N$50.

“I’m very grateful for the help I have received from the community,” Ms Shipanga said. “Sofia will register today and it would have been impossible to do had it not been for the goodwill of the people who responded to my plea for help.”

Haimbodi said: “I’m calling on all those whose pledges are still outstanding to give the money as soon as possible. And the contributions will continue until we raise the full amount of tuition fees for this year which is N$25,000.”

In the photo: From left to right are Epembe Councillor Mr Phillip Shikongo, Ms Maria Shipanga, Ms Linea Haimbodi of NCCI, and Erickson Ndawanifa the chairperson of Ohangwena Regional Council. 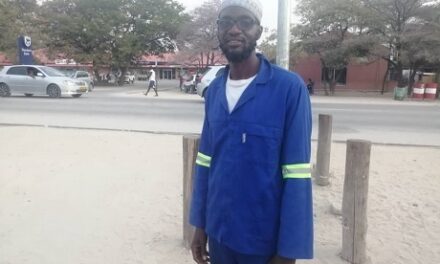 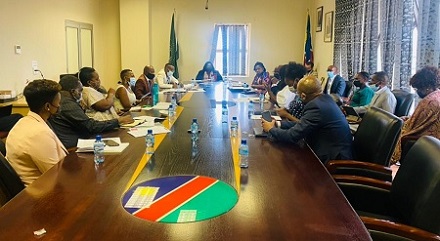