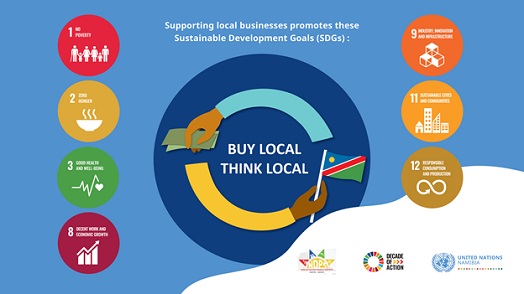 The need for everyone to support local businesses is as old as Team Namibia who was established in 2003 to make Namibians advance their own economically sustainable future by promoting the use of local products and services.

The aim of this not-for-profit company was to help increase the consumption of local products and services. In other words, Team Namibia was established to make Namibians buy goods and services made in Namibia by Namibians.

This was a good idea, and it’s still a good idea, because nobody can build an economy on the back of foreigners.

Even international institutions, such as the UN in Namibia, do acknowledge that the only way to reach the world’s Sustainable Development Goals is through local businesses owning their own economies.

But today the “support local” song and dance is just as lyrical and musical as it was in 2003. The situation of 2003 is still the same situation of today, if not worse.

Here in the north of the country prominent business people are still speaking out about the need for the government to regulate foreign businesses. Mostly the shifting of the economy into foreign hands is being blamed on the government’s unwillingness to do anything.

But nobody as yet has made the effort to look himself in the mirror and see that big local businesses are also contributing to the situation as they have not done much in the effort to support the smaller fish in the pool.

Local businesses do want to receive support from the government institutions, but on their part they are also not providing any support to the small businesses.

Today Team Namibia is a 17-year-old teenager. If she were a bright kid, and despite this Covid-19 situation, she would be going to university by next year.

But so far the achievements of Team Namibia are doubtful.

NCCI who is the God-mother of Team Namibia is also caught up in the entanglement involving government and foreign investors. So that close to 20 years the call to “support local” is still just a song and dance really.

This is a free market of course, where everyone is supposed to be given the opportunity to operate their businesses with as much freedom as possible no matter who they are and what nationality they are.

What is needed is just the emergence of government leaders and business leaders who have integrity and a spirit of service. Otherwise this “support local” thing will just be a long and drawn out song and dance.

The bitterest struggle is for economic freedom