When I was young and I used to visualize myself as an entrepreneur it was the time when ideas such as the black economic empowerment (BEE) or other similar variations were being discussed in Namibia and also in South Africa.

At the time, in the early 2000’s, both the pros and cons of the idea were under hot debate more especially at the top levels of political and economic strata. And in the end the cons seemed to be overwhelming so much so that the BEE idea disappeared in the thin air (at least in Namibia).

But before the idea disappeared I used to be one of the people who were not in support of the BEE. I used to reason that business achievement had to be left solely to merit.

I used to argue that: “those who are hardworking and show commitment to their business visions they would always stand out from the rest and compete for a fair share of the market according to their ability.”

But then as I grew up and got myself in the business sector of Namibia, I came to realize how wrong I was.

Today I know that in business you cannot rise to the top as a result of your hard-work, ability or commitment – or the grandness of your vision. Your success in business (at least in Namibia) will depend a great deal on who you know in the system.

By “who you know” it might sound as if I am talking about a system and society influenced heavily by socialism. No. This is a capitalist system I am talking about. The Namibian society and its economic system is by all accounts a free market (capitalist) system where people do business with those they want.

And that is the problem.

So now these days the Government is back again with the idea of BEE, which had been renamed NEEEF (New or National Equitable Economic Empowerment Framework).

The idea and spirit of NEEEF is to say that although this is a free market system, people cannot just continue to do business with those people they want as it happened during the 30 years after 1990 – because this way of doing business has not brought about the economic transformation which is needed.

Instead economic inequality continued during the years of Independence.

So now I am one of the ardent supporters of this NEEEF.

Consultation is taking place, and the bill will be taken through parliament and an act of parliament will be passed hopefully this year. And by early next year hopefully the law will become operational.

And hopefully within two years (by 2024 at least when the most explosive elections will take place) this Government would have done something that has a positive influence on the economic situation of the majority of the people of this country. 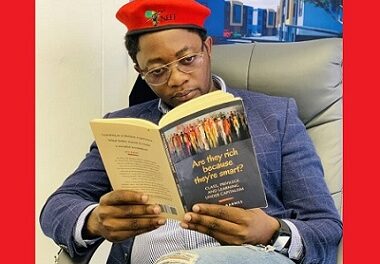