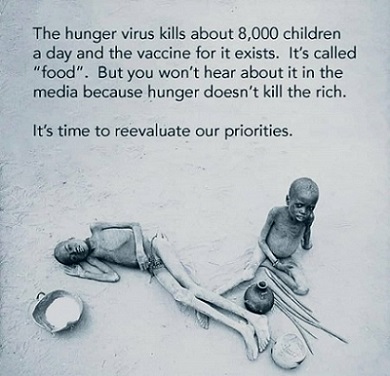 There is nothing else as worse for a human being as hunger. Hunger is the greatest disease of all diseases on earth.

Educational institutions come across as institutions set up to fight not just ignorance for its own sake but so as to fight hunger, poverty and unproductivity (unemployment).

It took me a while to have my eyes opened up to this reality.

There are those who are promoting hunger consciously, but the vast majority of them are doing it unconsciously – not being fully aware of what they are doing.

Just if you look at the Namibian society, can you see anyone standing up to promote not just food production but food consumption for all? Is there anyone fighting, really fighting hunger. I mean fighting, like you are fighting something.

There was a time when people went out to fight HIV/Aids. I saw them with my own eyes. The people went out wearing T-shirts, spending money and time on awareness campaigns, and using whatever method to promote the use of condoms, abstinence, etc.

Before long they invented a drug called ARV which suppressed HIV and “cured” Aids.

And today I can see the people who are fighting the Covid-19 pandemic. They are constantly out, engaging in spirited activities, giving “Covid-19 national situation” briefings everytime, sanitising everyone and enforcing social distancing everywhere.

It didn’t take them long to invent a corona vaccine.

But when it comes to the greatest disease of all times, hunger, is there anyone at all fighting the same way?

Rather it’s a world of PPH – people promoting hunger.

In the photo: This picture is for illustrative purposes only and doesn’t reflect the hunger situation in Namibia.

The death of African anthroponymic systems